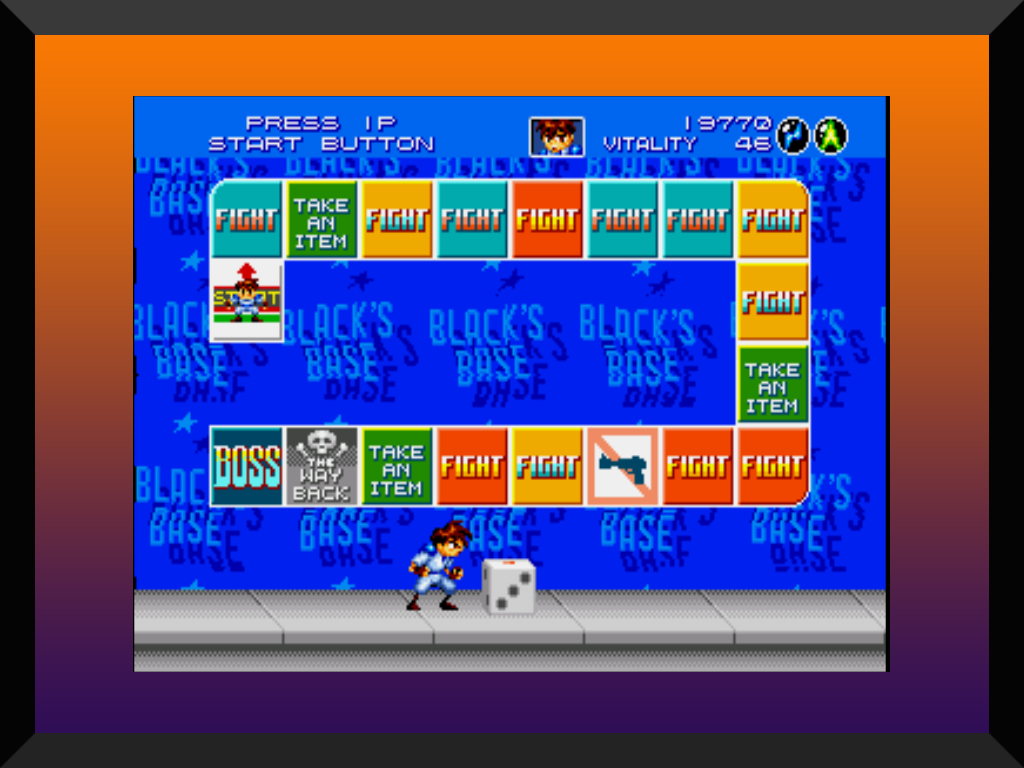 No, this isn’t another bandwagon anti-EA post.  It’d be a bit late for that, anyway.  Actually, the idea for this post came up whilst mulling over that line one day.  I know what it means in the EA context, but I started to examine what gave me a real sense of achievement when it came to gaming.

I couldn’t really think of too many recent games that I beat and thought I’d just accomplished something.  To that end, I reexamined the games that I’d played since childhood to try to determine which ones were the ones that I was proud of completing.  These are those games. They are not ranked in order of difficulty, but these are what I’d consider to be my “top five”. 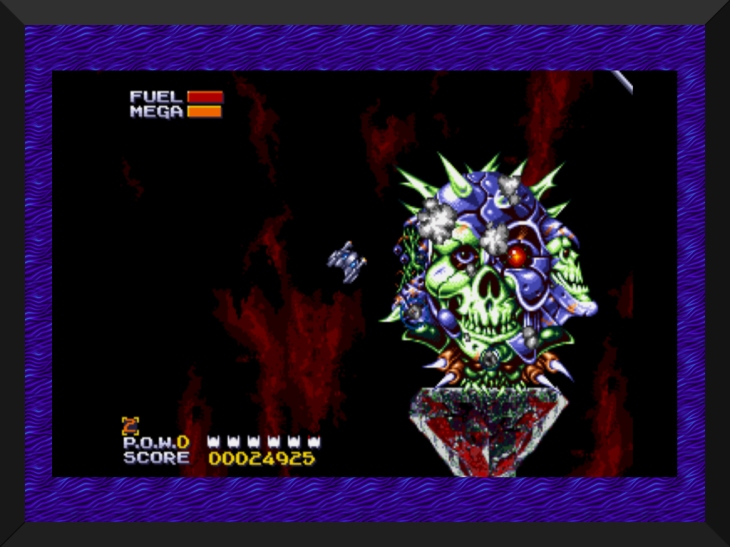 It was artwork like this that sold me on the game.

I don’t know how popular or common this game was at the time.  I know that we got a Sega Genesis in ’93 that came with Sonic 2 and the offer for one other free game via mail-in.  Without the internet or magazines, we more or less had to choose the game based on the pictures and brief descriptions of each game on the back of the box.  We ended up choosing Subterrania due to the art style.

I remember plugging in the cart and booting it up to an opening cinematic of sorts that I thought was impressive for the time.  When we actually started playing the game, I was also impressed with the colours and physics.  I had never played anything quite like it before.  I had also seldom played something so brutally difficult, yet alluring enough to want to continue to play.

Subterrania is a multi directional shooter in which you have a limited fuel supply, have the hull integrity of a potato chip and are expected to rescue hostages, collect parts and kill enemies/bosses en masse.

I never beat the game as a child.  I moved on to newer things, but I never forgot Subterrania.  Years later, as an adult, I found a boxed copy (manual and all) for a great price locally.  I snatched it up immediately and made it my quest to finish it.  All told, it took me roughly three dozen retries over a period of a couple of months, but it was all worth it for the satisfaction of a job well done.

This is only the second level.  And I’ve got one life left.

Blaster Master is another game that I first played as a child and didn’t beat until I was an adult.  I actually originally acquired this as a trade from a kid who couldn’t beat the first level.  Truthfully, at the time, I never made it past the first level, either.  Between the enemies that constantly respawned, numerous inescapable traps that bled your life away, and the fact that your extra lives were scant, I just didn’t have the skill to master this one as a child.

Blaster Master was something of a unique game at the time.  There were essentially two (required) modes of play.  The first sees you using your tank, SOPHIA the 3rd, in platforming segments.  Over time, you acquire new weapons and power-ups which make the game more fun and unlock new areas.  You acquire these in the second mode:  a top-down run-and-gun where you control Jason, who seems to have the largest head of any character I’ve ever seen.  These are where the game gets most frustrating, as it’s easy to get damaged and you might as well be shooting rubber bands.  You can acquire more GUN power, but every time you get hit, you lose some.  You have to approach every situation strategically.

When I started getting back into retro-gaming as an adult, this is a game I sought out with the express purpose of clearing it.  Upon my first playthrough, I cleared the first level.  And died shortly thereafter.  I gave up in frustration and came back to it with a clear head a week later.  I made it a bit farther, but still couldn’t finish.  It was like that for weeks.  For the most part, I’d get a bit farther each time.  After what must have been forty playthroughs, I finally beat it.  I had been sitting on the edge of my seat for the last hour of the game.  My fingers hurt.  I was sweating.  But I’d won.  I can’t recommend this game enough.

There is no better stage to illustrate how difficult this game can be.

Gunstar Heroes was a title published by Treasure, who has since made a name for themselves with obscenely difficult, yet incredibly fun games.  They published Sin and Punishment, Radiant Silvergun, Ikaruga…excellent titles that area instantly recognizable as Treasure games.  Gunstar Heroes is a run-and-gun game that really shows off the capabilities of the Genesis.  Tons of sprites on screen at once, lots of fast-paced action and beautiful colours mean that it has aged very gracefully.

I acquired this game a couple of years ago.  The first stage is a cakewalk.  After that, it gets progressively more difficult.  By the time you get to the dice stage (pictured above), you’re hoping for a good run of luck.  On the run that I cleared the game, I managed to get through the dice stage on just a few rolls.  Normally, I end up rolling ones and fighting nearly every boss.  After your clear the first four stages, it gets even harder.  The final battle is essentially a boss rush.

When the end cutscene started playing, accompanied by its beautiful soundtrack, I nearly shed tears of joy.  It took me two years, off and on, to beat this game on Expert.  I haven’t even gotten close in subsequent playthroughs, but I won’t give up because this game is just so fantastic.

Due to procedural generation, every single run is different.

Spelunky is a great example of a recent game that captures the difficulty and reward of early platformers.  It took me a few months of playthroughs to get the standard ending.  It took another year to get the “true” ending.  And, while it is co-op, I’ve never made it very far in a playthrough with anyone else:  it’s too easy to kill one another.

I have yet to get the “eggplant” ending, in which you carry a highly perishable fruit throughout the entire game to hurl it at the final boss, turning him into a one-hit-to-kill pushover.  I don’t know if my dedication runs that deep.

Unlike a lot of the other games on this list, Spelunky is very easy to come by.  It’s available for every platform under the sun and is routinely on sale.  You owe it to yourself to give this one a try.

This screenshot is from a newer, nicer source port.

I first played the original Doom in 1996.  It was quite a revelation.  Suddenly, all the console games looked amateur by comparison.  Doom was the first real reason that home users wanted to upgrade their PCs.  It was the progenitor of the framerate battle.  It was violent and fast.  I fell in love immediately.

Doom II is, in some ways, more of the same.  It’s still violent.  It’s still fast.  It’s still a hunt for keys.  But, it differs in two ways.  First, it’s quite a bit more difficult, given the new enemies provided.  And secondly, the super shotgun.  Quite possibly the best FPS weapon ever, the super shotgun was a guaranteed one-hit kill on all but the toughest enemies.  Sure, it munched down ammo, but the sound and the reload animation are timeless.  In short, after picking up that gun, I had a hard time switching to any others.

The story of Doom II picks up more or less where the first one left off.  You went back to Earth after saving Mars from Hell…only to find that Hell has invaded your home town!  You beat back the hordes of Hell from the surface, later descending into Hell itself to fight the forces of evil.  The final boss is the big baddie pictured above, known as the Icon of Sin.  He spawns an endless horde of lesser baddies while you try to destroy his brain.  On Nightmare difficulty, it’s very difficult to keep up.

When you finally clear it, you’re met with scrolling text and epic music.  You’ve done it.  The invasion is over.  Earth is saved.  Hell is a wreck.  You wonder where bad folks will go when they die now.

What are some of the games that made you feel a sense of profound accomplishment when you cleared them?  Let us know in the comments section.